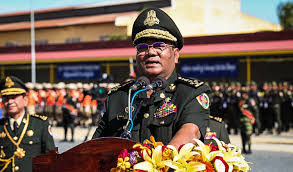 The commander of Prime Minister Hun Sen’s Bodyguard Unit (BGU) Hing Bun Heang on Sunday dismissed a short video clip that went viral on social media in which he says he is preparing for a war with the United States over its aggressiveness towards the Kingdom.
“If the US does anything aggressive and illegal [against Cambodia], our forces are also prepared to fight back. There’s nothing to be afraid of the US. Why believe a small opposition group and freeze Cambodian officials’ assets and mine?
“It’s [the US] is the farther of democracy. And if it really is a democracy, it must determine if it’s justified to put sanctions on a person like me.
“Let me clarify … I don’t have any business [in the US]. I’ve been in the army my whole life. I’ve been defending the motherland and protecting top leaders as entrusted by the Ministry of National Defence,” Bun Heang is heard saying in the video.
Bun Heang told on Sunday that the US had no legal basis to put sanctions on him and government officials.
He said the video, which drew widespread public criticism, was fabricated to discredit the BGU and senior government official.
“In the eyes of a superpower like the US, small countries are always wrong. As for the video, it was edited. I didn’t say so. I don’t have any intention to fight the US. ” How can Cambodia fight the US? Actually, I want to fight villains who destroy democracy and peace in Cambodia,” he said without elaborating.
Political and social analyst Hang Pitou said the remarks made in the video, even if it was true, represents the view of an individual, not an entire nation. He said it was meant to show the courage of an army chief, but would not have any effect unless it is made by the head of the government.
“I don’t see any impact. It’s just overreaction from the public. [Bun Heang] meant to say Cambodia isn’t afraid of the US,” he said.
The video followed the US Treasury Department’s blacklisting of individuals subject to sanctions under the Globle Magnitsky Act over alleged violations of human rights and democracy in Cambodia.
The US alleged that Bun Heang has severely abused human rights over the past years, which includes the assault on two opposition lawmakers by BGU members in front of the National Assembly in 2015.