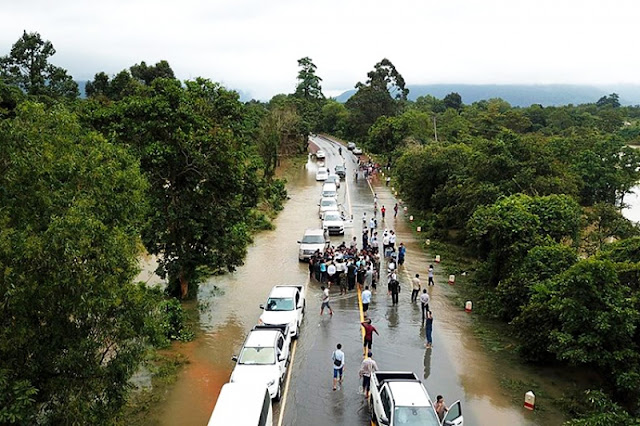 AS FLOODING continues to take its toll on provinces along the Mekong River and beyond, traffic on a busy national road leading to the coastal province of Preah Sihanouk has been disrupted, the Ministry of Water Resources and Meteorology said.
Ministry spokersperson Chan Yutha told that on Sunday that the flood waters in Kampong Sela district would flow to the Stung Prek Tnout steam and inundate some communes.
“There’s flooding on National Road 4. Small cars can pass, but heavy vehicles are not allowed on the road for now,” he said.
He said floodwaters would recede if the rain stopped falling, but it would eventually flow to the Prek Tnort steam in Kampong Speu province and Stung Sla Ku in neighboring Takeo. Some nearby ommunes in the latter might also be inundated, he said.
Kompong Speu provincial governor Vei Samnang told the news on Sunday that rain precipitation of 180mm which has fallen since Saturday has caused flooding in communes near Phnom Srouch district direction, inundating people’s house and agricultural farms.
“We don’t have a report of total damage yet because the water has not receded completely,” he said.