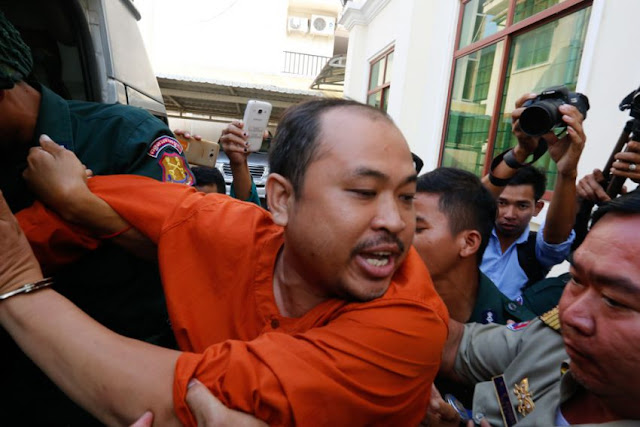 Kim Sok, who was released on Friday from the Prey Sar prison where he served a one-and-haft-year sentence on charges of incitement and defamation brought by the Cambodian People’s Party (CPP), has vowed to double his efforts to promote democracy in the Kingdom.
However, CPP spokesman Sok Eysan warned the ananlyst that he could court more trouble if he fails to speak the truth.
Sok was sentenced on charges stemming from comments he made regarding the murder of Kem Ley, who was killed in broad daylight in 2016 by a gunman who referred to himself in Khmer as Choub Samlab or “meet to kill”.
He was detained in February last year for his comments after a lawsuit was filed by CPP lawyer Ky Tech.
Speaking to the news on Sunday, Sok claimed he wouldn’t dial back his criticisms of the government, but rather double down on it. “ My working habit is my nature since I was born. I promised before I was jailed that I would speak the truth. They imprisoned me. So when I got out of prison I double my work.
“I would not incite or defame as they accused and jailed me [of doing]. Double work means I will continue my mission to promote democracy, at least twice as much as I used to do before.
“I won’s stop. Nobody must stop but continue to strengthen the spirit of democracy,” he said.
When asked if he worried about another arrest while commenting on issues in the future, Sok said he did have his fears.
“if I said, I wasn’t worried I would be lying … I am only human. I am worried, and I am afraid just like normal people. However, my worries and fears are limited … I am worried that I have little time to work on my mission, to promote democracy in Cambodia,” he said.
Eysan said it was Sok’s right to make comments, but warned that he could face challenges if he didn’t speak the truth.
“that is his right. He is entitled to be an analyst, but his work must connect with reality which makes his analysis ethical.
“If he analysis is politically motivated and intended as an attack on the ruling party or cause problems for him,”  Eysan said.
The sentence that landed Sok in prison was delivered by the Phnom Penh Municipal Court in August last year.
Confirming charges of “incitement to commit a felony and public defamation” the court sentenced him to 18 months incarceration and ordered him to pay a fined of 800 million riel (&200,000) to Prime Minister Hun Sen.
0 0
Facebook
Twitter
Pinterest
LinkedIn