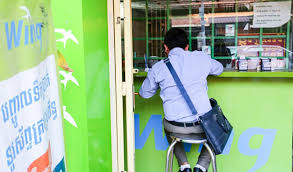 CASHLESS payment service provider Wing Specialized Bank launched a new e-wallet last week that allows customers to use their mobile phones for transactions, according to a press release on Friday  Called WingPay, the service is now available for use at over 20,000 merchant partners in the Kingdom, ranging from tuk-tuks and street vendors to large retail outlets.
It allows customers to transfer funds and pay bills using either smartphones or conventional cell phones. Non-smart phone owners can simply dial a payment code to initiate a transaction.
Wing’s CEO Jojo Malolos said cashless solutions will someday account for the majority of payments in Cambodia as almost haft the population owns a mobile device.
“[WingPay] allows everyone to do many things without the need to carry physical cash or waiting for small bills from the merchants,” said Malolos.
Plenty of platforms
Mobile payment platforms are quickly gaining transaction and providing a new channel to promote financial inclusion in Cambodia. Local firm Pi Pay has taken the lead among mobile payment services.
As of March, their app had been downloaded over 210,000 times since its launch in July of last years.
There are several other apps competing for customers in the mobile payment market, including DaraPay, Bongluy, Speedpay, GrabPay, and Smartluy.
Additionally, several banks have rolled out their own payment platforms, either as standalone apps or as part of their online banking platforms.
0 0
Facebook
Twitter
Pinterest
LinkedIn