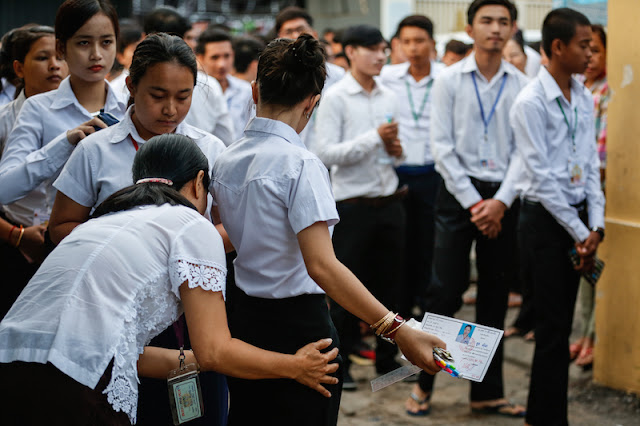 The ministry of Education says the national high school exam process went smoother than last years, despite a male student in Kampong Thom province missing the test because his name was mistakenly removed from the rolls.
Ministry spokesperson Ros Salin said: “The two-day examinations were better than last year as all proctors were responsible in their obligations, even thought it rained heavily in some province.
“Candidates respected the rules of the examination perfectly and they did not bring any documents or banned electronic devices,” he confirmed.
The few irregularities he mentioned were five mobile phones that were seized and two case of candidates trying to bring in documents.
“There were 46 case in which candidates had health problems and received first aid, but most managed to resume their examinations. However, five of those were sent to the hospital and could not resume doing so,” Salin said.
Sum Raksmey, a student at Kampong Thom’s Steung Sen High School, did not see his mane on the list as the school mistakenly deleted it from the register. He has not yet received word about being able to sit the examinations.
His father, Brasat commune police chief Soeung Phea, said his son went to school regularly, but because of a technical error, his mane was taken off the list.
He said on Sunday, a school director alerted them about the mistake and apologised. Phea called on the Ministry of Education to correct it and allow his son to sit the examinations.
“Now my son is hopless because there is no solution at all. Even though the principal said my son goes to school regularly and he has never been absent,” Phea said.
Steung Sen education office director Yin Bunhuot said he received information on Raksmey’s case but was unsure what measures were being taken.
Steung Sen High school deputy management committee director Chhorn Thung said the mistake occurred unintentionally.
“The missing name was caused by a technical problem. This student change from classroom B to classroom C, so there were two name at the same school and when they arranged the student names, the two name were wrongly deleted,”
Ros Salin did not respond to us for request for comment on Raksmey’s case.