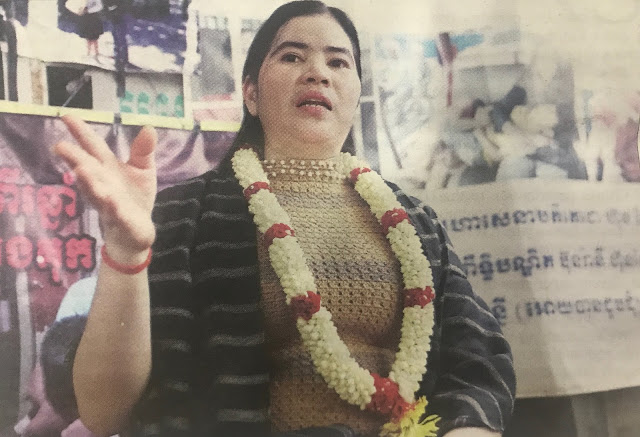 Boeung Kak community land activist Tep Vanny on Thursday expressed her frustration with her just-ended two-year imprisonment.
Vanny said she and other land activists never wanted to participate in any protests in front of Prime Minister Hun Sen’s private residence or any state institutions.
“I never thought they would do that to me. It was unexpected that his [land dispute] development led to me receiving unfair prison sentences. It separated me from my family, my parents and my children.
“I was imprisoned for two years and five days. and unexpectedly, because of these developments.
“Staying in prison is no different from an animal locked up in a cage, which means I was in a cage. I saw the prison ceiling, prison bars, prison locks-there were four to five locks from the prison cell to the outside.
“I was in extreme shock. I didn’t do anything wrong. Why did they imprison me?” she asked.
Vanny said with no money left after being released, she was unsure how she would sustain here livelihood.
“Some people think I’m rich. They think I was paid to do what I did. We are innocent. If we don’t help each other we will not succeed. At my old house, the ceiling is leaking.”

Vanny was released on Monday night after receiving a royal pardon at the request of Prime Minister-designate Hum Sen.
Phan Chhun Reth, another Boeung Kak community land activist, is among the 4,552 families who have been affected by development.
“Last night I was so happy because Vanny was released. I couldn’t sleep the whole night.
“The authority has not solved my case yet. They said my house is located on [Phnom Penh] City Hall’s land. When I built my home, it was not on the whole land,” he said.
Chhun Reth said her house measures 236 square metres, but the authority grants her only 140 square metres.
Vanny and Chhun Reth urged the new government to quickly find a solution for them.