While being held in custody for nearly a year, Kem Sokha, the opposition leader, was a judge The Phnom Penh Municipal Court on Thursday afternoon decided to continue to be detained for another six months in the Tropang Pha pen prison. Human Rights Watch said the detention was a ” Serious human rights violations. 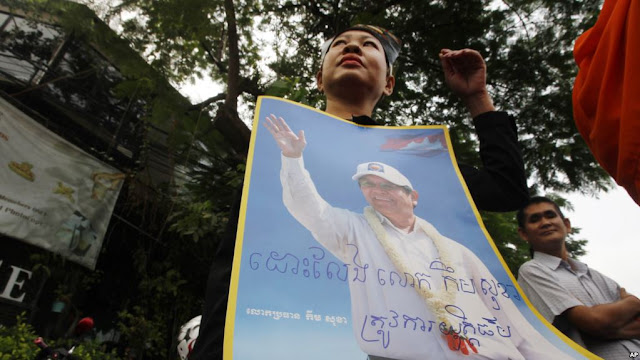 Phnom Penh –
Prime Minister Hun Sen’s Kem Sokha has been summoned by Phnom Penh Municipal Court Judge on Thursday. Detained for six months for questioning on charges of “treason” after being detained for nearly a month Years.

KRITTY, Phnom Penh Municipal Court judge Thursday morning held a hearing in Tbong Khmum prison, Tbong Khmum province. To continue to detain CNRP president Kem Sokha as the one-year detention is nearing completion. It was reported that during the morning of this year’s Prak Phlong Prison, the authorities blocked many roads and detained. After receiving orders from Prime Minister Hun Sen to monitor those willing to support Mr. Kem Sokha in front Prison.

Mr. Peng Heng, one of four lawyers who went to the defense prison for Mr. Kem Sokha, told VOA this afternoon Thursday, after nearly three hours in prison, the judge decided to keep Kem Sokha in jail. Six months into questioning, he added, “lawyers are sad The decision to go to that resolution, with nearly a year’s inquiry, is long and that the client has Is out of bail to cure many illnesses.

“Interim detention for 12 months, and the judge has asked to investigate the case, both witnesses and clients. We are ready to complete pre-trial detention. We have also argued [confirming] the reasoning to the court so that we can be banned, but ultimately we get the result. The results are not satisfactory. We express regret. “

Mr. Heng added that lawyers will visit Mr. Kem Sokha in the future to discuss how to proceed. More.

VOA can not be reached for comment from Mr. Iran, Phnom Penh Municipal Court spokesperson and Deputy Assistant Secretary Sieng Sok. The case of Kem Sokha is not until Thursday evening.

As early as next week, Kem Sokha will be detained for a year only after he was arrested. From home, there was a sense of freedom when the police stormed the center of the night three months after the CNRP Has won similar support to the CPP Local elections in 2017.

Mr. Kem Sokha was arrested in the midnight of midnight on September 3, 2017, accusing him of ” Foreign Minister Khieu Kanharith plans to overthrow the government led by Prime Minister Hun Sen. He has been sent to the commune. In Tum Phnong Prong, Tbong Khmum province, under accusations In terms of foreign affairs under Article 443 of the Penal Code.

Both Kem Sokha, both the CNRP and the United States both denied the charges as false “With the threat of economic sanctions and individual sanctions, Western governments have also condemned the crackdown. By them and other watchdogs as deemed it to be Program excluded political opponents ahead of elections in the country.

Previously, Kem Sokha’s defense team sued the courts to annul the detention Mr. Kem Sokha, claiming that the capture of the representatives of central Kampong Cham in the middle of the night and such parliamentary immunity Is Cambodia’s top illegal act. The lawyers also sued Mr. Kem Sokha for bodily surgeries, diabetes and surgery. Taking rid of spinal cord disorders to doctors ‘prescriptions, but their lawyers’ claims fail many times.

Prime Minister Hun Sen, who has been in power for more than 30 years, has repeatedly stated that Mr. Sokha Will not be released on bail.

The announcement comes amid speculation that Kem Sokha will be released on bail Thirty months after the detainees, known as “hostages”, were released And a series of amnesty.

Mr. Seng Senchan, a monitoring officer for the Cambodian Human Rights Association, said that continued detention of Mr. Sokha was not an option to investigate. Letting him get treatment is a serious violation of human rights. He added that by law, the first option to be implemented for the suspect was to allow him to remain on bail to investigate Not detained for a long time.

“If detained people are arbitrarily detained, even though they know the person he can meet Obligate and comply with statutory provisions, which coordinate or cooperate with the competent authority in order to proceed with the enforcement of the law. Ahn, it’s a story that violates human rights Yes, because we know this detention policy is not a mandatory requirement to detain that person.

After Kem Sokha detained, many international NGOs reacted and criticized the Cambodian government for their continued detention. Earlier in May, the United Nations Working Group for the Detention of Arbitrary Detention and Co – The International System for Human Rights has called the arrest of Mr. Kem Sokha As a shameful act, and international humanitarian and demanded that authorities release him immediately.

Other major international organizations and organizations include the European Union, Human Rights Watch, the group The Association of Southeast Asian Nations (ASEAN) for Human Rights, as well as some major democratic countries, has also called on the government’s director Hun Sen’s release of Kem Sokha immediately Condition as well.

But senior government officials claim that the arrest of Kem Sokha in prisons is according to a law consistent with democracy. In Cambodia.