The Anti-fake Anti-Fraud and Fraud Committee on Thursday cracked down on a place to import and distribute a drug. Phnom Penh, arresting one location owner and confiscating over one million illegal drugs. 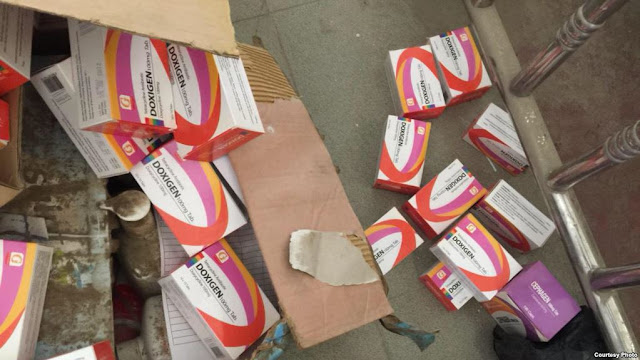 Phnom Penh –
Authorities detain one Cambodian after discovering more than 500 illegal drugs at a site in Phnom Penh Suspected of illegal storage and distribution of drugs. According to the authorities and the press release of the Anti-Fraud Action Committee, which was obtained by VOA.

The press release of the counterfeit counter product committee issued on August 18, 2018 confirmed that On August 16, a mixed police force cracked down on a place of illegal drug distribution named “Reaksmeas” In O’Bekkom commune, Sen Sok district, Phnom Penh More than 500 cases have been seized.

“With the co-ordination of the prosecutor of the Phnom Penh Municipal Court, we have monitored 23 drugs A total of 500 cases totaling 1,329,620 and 69,105 packages and drugs expired in total of 12 Cigarettes. “

Following the review, the Joint Committee concluded that preliminary violations include:

“Look at his skills and study, and he’s got the results we know, we’ve just arrested a craft owner To interrogate, the case is in the hands of the court. Justify your court. “

In the first three months of the year 2018, the authorities detained 10 people sent to the court More than 88 tons of illicit goods, including pearls and purple beer, were confiscated by brokers in Phnom Penh. Phnom Penh.

The head of the anti-fake product committee, Meach Sophana, recently said that the reason for the There has been an increase in counterfeit product traffic because of high growth and rising market demand.

Social watchdogs say that the increase in fake product traffic in Cambodia is caused by a lack of management. And regulatory authorities and that relevant institutions should strengthen law enforcement and disseminate the implications of Fake products have been widely and effectively implemented.