Cambodian authorities arrested 10 people and confiscated 88 tons of fake products in Phnom Penh. Meach Sophana, president of the Anti-Fraud Prevention Committee, said the reason for the increase in product The fake is due to increased consumption demand as Cambodia develops. 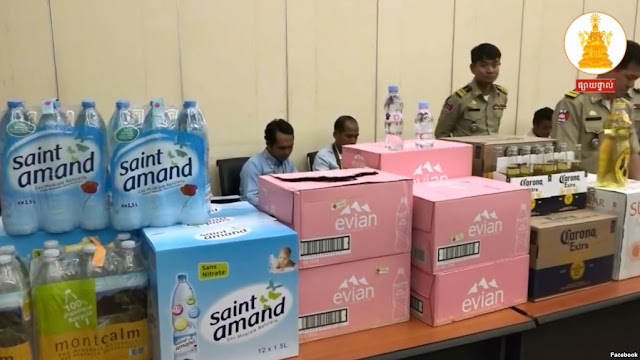 Phnom Penh –
The counterfeit commodity commission on Monday held a conferences showing 88 tons of fake products confiscated Over a three-month period and clarified the reasons for the rise in fake products as a result of economic growth And increasing market demand.

Social watchdogs cited an increase in counterfeiting products in Cambodia due to a lack of access to information. Control and control of the authority.

Ten people were arrested and sentenced to more than 88 tons of counterfeit and illegal goods, including poppy Net water and beer were confiscated by brokers in Phnom Penh within three months of the wrong production campaign. Law and counterfeiting, according to a statement issued by the Border Commission Fake counterfeit products.

Mr. Machcha Sophana, President of the Anti-Fraud Prevention Committee, speaks at a conference on the presentation of illegal products at the ministry’s ministry. The police in the afternoon of August 6, 2018, authorities have detained 10 people sent to the relevant court With nearly 90-tonne counterfeit and illegal products Location separate from each other in the capital.

He added that 88 tons of counterfeit products were seized at the site of meat production, which did not comply with the opening rules. Pepper & Craft Producer does not comply with the Law and the Importation of Illegal Manufacturing and Packaging on Beer, Pure Drinking and Patent Products And so forth.

Mr. Ma Sophanna added that the reason for the increase in fake products was due to demand. Of consumption is increasing and while Cambodia has a booming economy.

“As our country progresses, the economy has developed a lot of demand for our lives This time of growth, we need so many supplies. So to meet demand by The message of local products is limited, importing is a lot So all the opportunists, the villains, the corrupt people he copied. “

Mr. Ma Sophanna added that fake products have been causing serious health problems, such as stomach upsets or Causing cancer. He said that these counterfeit products would be destroyed in the future, but he did not confirm that they would be destroyed. Any.

San Chey, executive director of the Social Accountability Alliance of Cambodia, told VOA that the increase in counterfeit product traffic at Cambodia is caused by a lack of control and control by the authorities.

He added that relevant authorities and institutions should strengthen law enforcement and promote the effects of counterfeit products Be wider and more effective than mention the reasons for rising economic growth.

“It should be blamed for a lack of or a weakness in controlling the sale or distribution. Distribute counterfeit products rather than bragging that there is a lot of people using it. And leads to a sale that is associated with counterfeit products It’s just bragging and good looking and can be a cover up of the shortcomings of the practitioner. The law. “

The Ministry of Interior’s counterfeit anti-counterfeiting committee also called on people to report to authorities about the location of production or Bogus products that pose a high risk to health and social safety, so that authorities can take action against perpetrators In time, too.