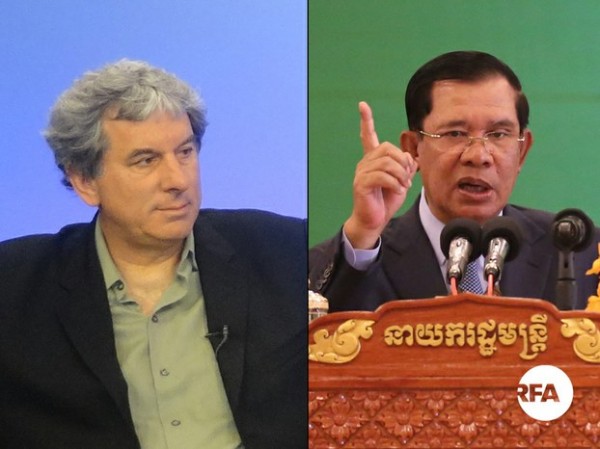 International Human Rights Watch director-general Heng Sen will have no fate with Malaysian Prime Minister Najib Razak, who has just been defeated and has been fired. Arrested for corruption scandal.

Human Rights Watch director for Human Rights Watch, Brad Adams, told Asia Free that he predicted Hun Sen and his family and officials of his corrupt regime and Violations of human rights and the violation of democracy in Cambodia, someday, will be avoided by the punishment of their sins. “I believe that Mr. Hun Se Will take the last of his life in prison. I do not know when it will happen. But I do not believe Hun Sen is immortal enough to remain in power for life. One day, he will fall out of power. At that time, the Khmer people would demand that they be convicted of the crimes he committed, such as human rights abuses and corruption among many other crimes. Countless. I can not say when this will happen. “

Although Brad Adams can not say when Mr. Hun Sen will be punished at any time, he insists that Mr. Hun Sen is in fact ineligible and facing the punishment since 1993. While the Cambodian People’s Party lost to Funcinpec, Mr. Hun Sen has taken the oath of creating a fake secession zone for the UN to accept the position of co-director. The minister gave him. Mr. Adams continued that Mr. Hun Sen would only be re-condemned in 1998 in the national election, while the CPP might have possibly lost the election, Hun Sen continues to seize power. There were also protests from all over the country.

According to the report, within the Cambodian People’s Party at that time, he also wanted to remove Mr. Hun Sen to be sentenced or retired, but fortunately, Mr. Hun Sen could continue to seize power. Has another mandate. Mr. Adams confirmed that until the 2013 election, Mr. Hun Sen may lose to the CNRP if the ballot counts correctly and does not fraud. After the 2013 election, up to a million Cambodians protested against the election results.

Brad Adams added that no authoritarian leader in the world can escape punishment or die without corruption and human rights abuses. Severe like Hun Sen.

However, Hun Sen’s spokesman, Phay Siphan, argues that he is not interested in the suggestion of Mr. Brad Adams because he says the director of Human Rights Watch The Human Rights Watch has taken Hun Sen as an enemy. Mr. Siphan added that such claims were “a personal and biased attack that did not give Hun Sen justice.” “He looks at Cambodia as a trash. So I’m not interested in him, because there is nothing for justice to disclose information and justice to the judgments about Cambodia. “

Mr. Siphan defended Mr. Hun Sen as a clean person, referring to Mr. Hun Sen, who boasted that he did not have a wealth of corruption because his assets He is only in schools, temples, wells, or canals.

Mr. Hun Sen, who met with workers at Koh Phangan garment factory in December 2017, had spoken out against an international order to punish Mr. Hun Sen and his officials for freeing assets that he had no money. “It’s freezing! Take away! You want to spoil the wealth, too! And who’s taking the money out of the country they take. I encourage them to take it. Do not let the good Cambodians take money to send abroad. I would send them to school and send them to the old monastery for sex. “

Although Mr. Hun Sen claims he has no wealth, as a prime minister with only over a thousand dollars (US $ 1,150), he has assets, donations, and road construction. Or the school names his name almost everywhere. Moreover, in April, he raised a large new house in Toul Krasaing, Takhmao town.

According to a Global Witness report issued in July 2016, the wealthy wealthy family of wealth inherited from corruption and exploitation Khmer citizens. The organization found that Mr. Hun Sen had no income other than a thousand dollars a month, but the clan family had companies with more capital $ 200 million.

Bridgeman’s remarks about the fate of Prime Minister Hun Sen coincided with the arrest of former Malaysian Prime Minister Najib Razak, who was recruited by Malaysian authorities. Arrested on July 3 for corruption charges worth up to $ 4.5 billion